Laurens Vanthoor has enjoyed two very special last two races with the Porsche GT Team. He won in IMSA, and then he won Le Mans. 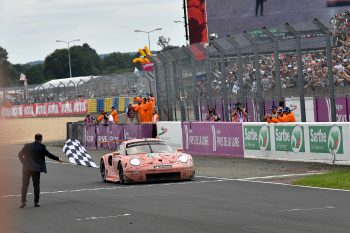 Vanthoor captured his first victory at the 24 Hours of Le Mans. He was part of Porsche’s “Pink Pig” entry for the Manthey Racing-run No. 92 Porsche 911 RSR.

Vanthoor reunites with his full-season IMSA teammate, Earl Bamber, in the CORE autosport-run No. 912 Porsche 911 RSR for the Porsche GT Team. They won the most recent IMSA race at the Mid-Ohio Sports Car Course in May. Vanthoor was the only U.S. driver who raced with a different Porsche team at Le Mans, as CORE embarked on its first Le Mans trip.

? Check out a recap as Michelin technical partner teams headed back to @Mid_Ohio, as @PorscheNAracing captured its second @IMSA win of the year and first for @EarlBamber @VanthoorLaurens. #IMSAatMO pic.twitter.com/d0rTx2s366

It’s been a whirlwind of emotions for Vanthoor, who followed younger brother Dries as a Le Mans class winner and achieved his greatest success in racing.

Vanthoor is going for the full-season championship, and enters Watkins Glen seven points back of the lead.

“It’s a relief,” he said of winning Le Mans. “We’ve already achieved something pretty nice this season. I have focused on the championship. Last year for us was a year to learn and adapt to a new car and for me being a new driver there.

“This year, everything seems to be pretty sorted. We’ve had good pace for all the races so far, but it’s still a very long way to go. We’re not even halfway. We will be halfway at Watkins, I think.

“But how the points are working in IMSA just means you have to be very consistent. You’re not allowed to make any mistakes and think about the big picture. I think that will definitely be our goal for the rest of the season.”