ELKHART LAKE, Wis. (Aug. 6, 2021) – Friday night’s State of the Sport presentation at Road America led by IMSA President John Doonan shared key insights from the 2021 season to date, while also setting the stage for the future.

The program covered a substantial amount of ground, from the unveiling of 2022 schedules for all IMSA-sanctioned series to providing key updates on NBC Sports broadcast coverage and competition enhancements.

These announcements coupled with this year’s other blockbuster headlines like LMDh-LMH convergence, the introduction of GTD PRO and multiple announcements from manufacturers confirming their future plans reinforces a bright long-term future for IMSA.

“We are on the cusp of an amazing new era for IMSA and sports car racing worldwide,” said IMSA President John Doonan. “The 2022 season reinforces one of IMSA’s biggest strengths, which is our tremendous collection of events, facilities and promoters.

“We will restabilize and simplify our GT platform through GTD PRO and GTD and prepare for the introduction of the new prototype category coming in 2023, while at the same time recognizing the considerable success of Daytona Prototype international (DPi) in its final season.”

The venerable group of 12 world class venues and events that has traditionally populated the IMSA WeatherTech SportsCar Championship schedule returns in 2022.

The Rolex 24 also kicks off the four-race slate of IMSA Michelin Endurance Cup races that also will include the Mobil 1 Twelve Hours of Sebring Presented by Advance Auto Parts on Saturday, March 19, the Sahlen’s Six Hours of The Glen on Sunday, June 26 and the season-ending Motul Petit Le Mans at Michelin Raceway Road Atlanta on Saturday, Oct. 1.

Three WeatherTech Championship classes – DPi, GTD PRO and GTD (Sprint Cup only) – will compete in the 100-minute Acura Grand Prix of Long Beach on Saturday, April 9. The 100-minute Chevrolet Sports Car Classic on Detroit’s Belle Isle circuit is set for Saturday, June 4 and will feature the DPi and GTD classes.

All told, the GTD class will participate in all 12 races – two of them Sprint Cup-only – with 10 races scheduled for the DPi and GTD PRO classes and seven races each for the LMP2 and LMP3 classes.

The Roar Before the Rolex 24 returns as well on the weekend of Jan. 21-23 and will again include a 100-minute qualifying race to set the grid for the following weekend’s Rolex 24. 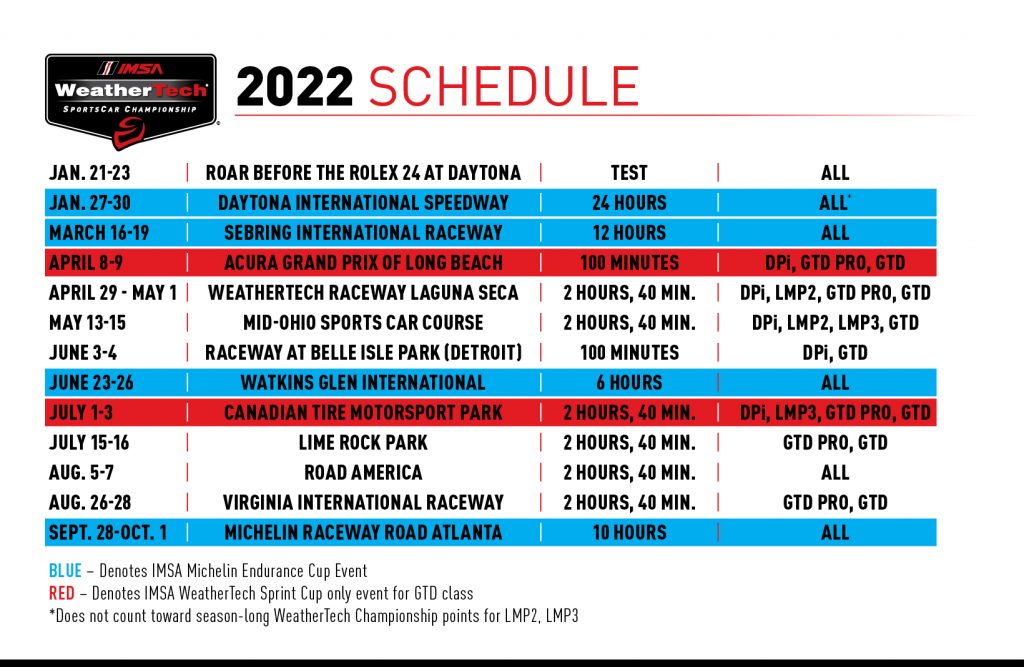 IMSA and NBC Sports officials confirmed that the start and finish of the 60th Rolex 24 At Daytona will be televised live on NBC network.

The start of the race on Saturday, Jan. 29 moves up to 1:30 p.m. ET with an hour on NBC, while the network also will carry the conclusion of the race with two hours of coverage from 12-2 p.m. ET on Sunday, Jan. 30. A complete 2022 programming schedule will be announced later.

The 2021 Rolex 24 set viewership records for IMSA on NBC and NBCSN, with nearly 1.1 million viewers for portions airing on NBC network. It was the most-watched IMSA race since the 2008 Rolex 24 At Daytona.

With GTD PRO set to replace the current GT Le Mans (GTLM) class in 2022, both of the WeatherTech Championship GT classes will use the same GT3-based technical specifications. GTD PRO is targeted for Pro/Pro driver lineups and factory-supported programs with GTD continuing its customer racing focus and Pro/Am driver lineups.

All GTD PRO and GTD cars will utilize Michelin’s S9M tire specification and each will have the same tire allocation per event. IMSA will manage GTD PRO and GTD as a single GT category from a Balance of Performance (BoP) perspective, although IMSA will retain the right to maintain competitive equivalency between cars within each class and between classes if necessary.

Qualifying for GTD PRO and GTD will be combined to establish an overall starting grid for the GTD category based on each car’s single-fastest lap time. Qualifying drivers in GTD will be required to be Bronze- or Silver-rated, whereas each GTD PRO car can use any one driver from its lineup to qualify. Class-specific points for qualifying will continue to be awarded in 2022, but the separate session for GTD qualifying points used in 2021 will be discontinued.

During pit stops, GTD PRO and GTD minimum refueling times will be equal for all cars. Full-course caution operational procedures for GTD PRO and GTD will be the same as in 2021.

The Bob Akin Award, which annually provides an entry to the following year’s 24 Hours of Le Mans, will be reserved for the highest-finishing Bronze-rated driver in the final WeatherTech Championship GTD point standings.

The IMSA Michelin Pilot Challenge returns in 2022 with a familiar slate of 10 races, all run as companion events to the WeatherTech Championship.

In addition to revealing the schedule, plans were unveiled to introduce a new per-event and season-long Bronze Cup award for participants in the Grand Sport (GS) class. To be eligible, every driver in a GS car’s lineup must be Bronze rated. 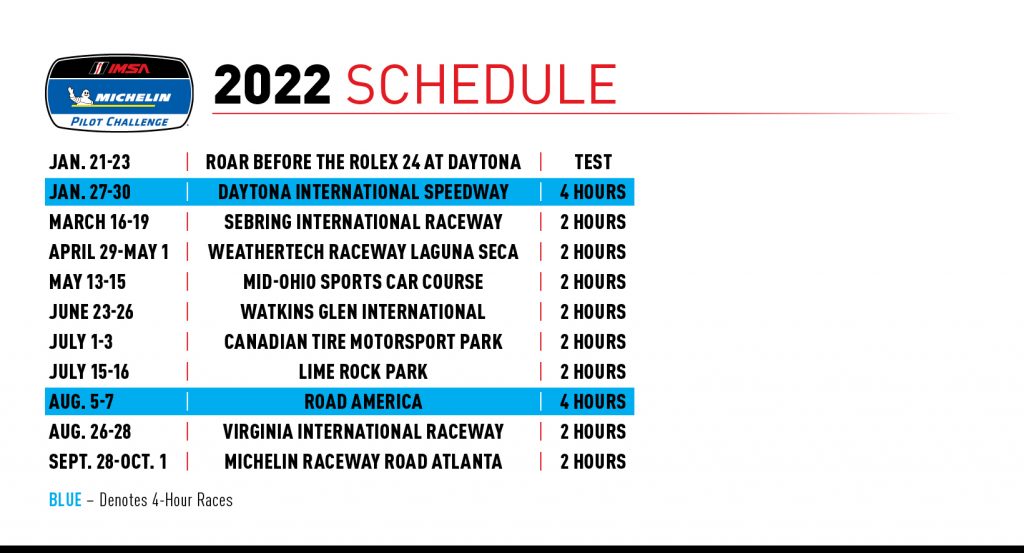 The Bronze Cup winners will be recognized on the podium at each event along with recognition and a season-ending award for the highest placing Bronze Cup combination in the championship standings.

The IMSA Prototype Challenge series returns in 2022 with a five-race calendar. Only LMP3 cars homologated in 2020 or updated EVO cars will be eligible.

The season opens with a three-hour race as part of the Roar Before the Rolex 24 At Daytona weekend on Jan. 21-23. All other races will be one hour and 45 minutes in length, beginning with Mid-Ohio on May 13-15, followed by Canadian Tire Motorsport Park on July 1-3, VIRginia International Raceway on Aug. 26-28 and Michelin Raceway Road Atlanta on Sept. 28-Oct. 1.

The 2022 IMSA Prototype Challenge driver champion will earn a $100,000 IMSA credit applicable toward entry fees for any 2023 WeatherTech Championship event. If there are co-champions, the $100,000 award will be divided equally among them.