For several young IMSA drivers, 2019 provided the opportunity to spray sparkling cider, rather than champagne, in victory lane.

The reason for that is sparkling cider is awarded to drivers less than 21 years old that make an IMSA podium. This makes these drivers part of an exclusive club: the “Sparkling Cider Society.”

Nearly a dozen young drivers visited the podium in Michelin’s three IMSA race series before they hit the 21-year-old plateau. A handful of others turned 21 during the season.

The New Yorker’s second full IMSA season produced a consistent and well executed Prototype Challenge championship. In his final race before turning 21, McCusker and co-driver Rodrigo Pflucker finished second in the season opener in early January at Daytona International Speedway. That was his first of three podium finishes this season, including a win at Canadian Tire Motorsport Park in July.

The then-18, now-19-year-old son of past driver, two-time Indianapolis 500 winning car owner and this year’s IMSA MICHELIN Pilot Challenge TCR driver and team champion, Bryan Herta, made an immediate impact in his IMSA debut at the Rolex 24 At Daytona. Herta set the fastest race lap as part of the GT Le Mans class-winning No. 25 BMW M8 GTE entry in the waterlogged race. He also raced at Sebring and Motul Petit Le Mans and returned to the podium there in the IMSA season finale. In-between, he set an IndyCar record as the youngest ever winner there at Circuit of The Americas only days before turning 19 and capped off the season with his second win at WeatherTech Raceway Laguna Seca.

The Belle River, Ontario driver is one of IMSA’s emerging talents, and dominated the competition en route to both Porsche GT3 U.S. and Canada series titles this year. He’s raced with Michelin in IMSA twice and been on the podium at both events. He shared the winning No. 13 ANSA Motorsports Ligier JS P3 in the non-points Michelin IMSA SportsCar Encore at Sebring in November 2018 (above). In his Rolex 24 At Daytona debut in 2019, de Angelis captured a class podium in a Canadian WRT Speedstar Audi. Only 18 and with plenty of potential, it seems likely de Angelis’ star will only continue to rise.

Casey entered 2019 in a strange spot having won last year’s TCR class championship but without a full-time drive. No matter; in a partial season he was one of the most impressive drivers again in the class this year. He finished on the podium with Mikey Taylor in a JDC-Miller Motorsports Audi in Sebring mere days before his 21st birthday this spring. In later starts, he scored poles at Canadian Tire Motorsport Park and Michelin Raceway Road Atlanta. He won at CTMP in a comeback drive, while at Michelin Raceway they ended a hard luck second.

Like McCusker and Casey Jr., Aubry scored an IMSA podium just days before turning 21 in Sebring, and therefore “slipped in under the wire” when it comes to making the “Sparkling Cider Society.” He raced the four IMSA Michelin Endurance Cup rounds for PR1/Mathiasen Motorsports in its LMP2 class ORECA 07. His speed at Watkins Glen International was exemplary and his class win there was one of two he had this year, the other coming at Michelin Raceway Road Atlanta.

Son of veteran sports car driver and coach David Murry, the younger Murry fully came into his own this season as one of the truly emerging stars. Dylan raced both an MLT Motorsports Ligier JS P3 and Mercedes-AMG GT4 for Riley Motorsports and won in both cars. His breakout weekend came at Mid-Ohio when he finished second in the GT4 car and won in the LMP3 car. He then won a wild race at Watkins Glen, together with full-season co-driver Jim Cox and third driver Jeroen Bleekemolen. Murry’s driving against many rivals at least twice his age, while running slicks on a damp but drying track, stood out as one of the drives of the season.

Murry and Cox added a second win together to cap off 2019 in the non-points Michelin IMSA SportsCar Encore at Sebring, another four-hour race. All the while he grew with the team too as the Georgian teenager excelled as much speaking with Mercedes-AMG, Freightliner and Michelin guests as he did on track.

The 17-year-old Mullan impressed in a debut ST class season in 2018. The Team USA Scholarship recipient advanced into one of the LAP Motorsports and L.A Honda World Civic Type Rs for a first TCR go-around this year. He was second at Canadian Tire Motorsport Park to score another podium result in the No. 52 car he shared most often with Max Faulkner. The Danville, California native also visited The Torque Show presented by Michelin at his home race weekend in Monterey.

Like Mullan, Huffaker joined the prestigious ranks of Team USA Scholarship recipients this year and embarked on that this fall. In a handful of starts for PR1/Mathiasen Motorsports in Prototype Challenge, the Californian showed a good blend of speed and aggression. A season-best second place at the three-hour race at Canadian Tire Motorsport Park demonstrated his promise.

Bryan Herta Autosport’s young driver tandem of Gottsacker and Filippi had considerable success throughout the year. In April, Filippi hit the 21-year-old milestone. Like Stacy, Gottsacker developed for yet another year in the sports car ranks and turned 20 during the year. The “kids” in the No. 21 Hyundai Veloster N TCR drove beyond their years all season, with three straight podiums coming from Lime Rock through VIR, and a Road America win sandwiched in the middle. Their efforts netted them a well-earned second place in the TCR standings only behind their teammates. As other members of the “Sparkling Cider Society,” they appeared on a Watkins Glen episode of The Torque Show presented by Michelin.

Stacy has seemingly been around for several years even though he is still shy of his 21st birthday. Now 20, the Owasso, Oklahoma native has had two back-to-back top-five seasons in IMSA MICHELIN Pilot Challenge competition with Kyle Marcelli and KohR Motorsports. The pair won at VIRginia International Raceway this year.

Seb Priaulx is the son of three-time World Touring Car champion Andy Priaulx, and the younger Brit looks a potential champion of the future. Andy Priaulx starred racing BMWs and Fords, and it’s the “blue oval” only that young Priaulx has starred with so far. He won on his IMSA MICHELIN Pilot Challenge debut in the season finale race at Michelin Raceway Road Atlanta. Working with Multimatic both in Europe and now in North America, this is a driver on the rise.

Cindric finally hit the 21-year-old mark in September after almost a third of his life spent racing a variety of machinery in open-wheel, sports cars, rally cars and NASCAR. His win at Michelin Raceway Road Atlanta co-driving with 18-year-old Seb Priaulx almost marked Cindric the “old wise man” by comparison. Still, together with his success in NASCAR’s Xfinity Series, he’s achieving a lot at a young age.

Two of the regulars in the IMSA WeatherTech Championship LMP2 class can “fly the flag” as “Sparkling Cider Society” alumni. They achieved quite a bit of success in IMSA before turning 21. Both are set to turn 22 by year’s end.

The younger Masson had the chance to race with his father, renowned spine surgeon, Dr. Robert Masson, at this year’s Rolex 24 At Daytona and also raced most events in both WeatherTech Championship LMP2 and Prototype Challenge LMP3 classes with Performance Tech Motorsports. The younger Masson’s pre-21-year-old run of form came in 2017 in the former Prototype Challenge class, when he won three of the four Michelin Endurance Cup races in class.

The youngest starter in the history of the 24 Hours of Le Mans, the now-21-year-old McMurry had a breakthrough season results-wise with PR1/Mathiasen Motorsports in WeatherTech Championship LMP2 this year. He won six straight races and the class championship. This capped off a run over the last few years where he’s bounced around racing various cars on a part-time basis but has not yet had a full-season opportunity. Next year, he’ll go from one championship winning team to another with Meyer Shank Racing in its Acura NSX GT3 Evo. 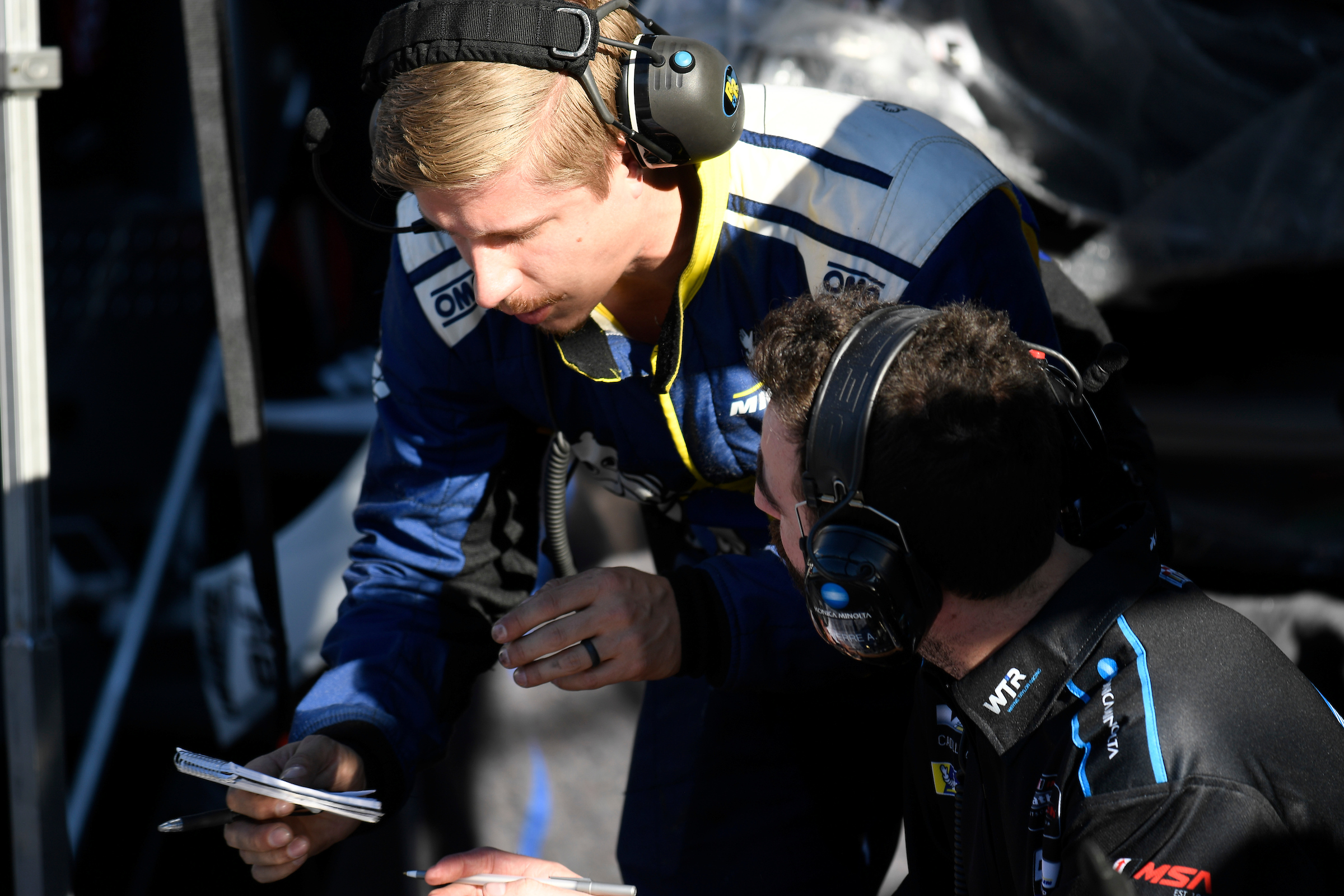