Risi Competizione and Keating Motorsports combined to make the GTE-Am class podium at the 24 Hours of Le Mans.

The trio of Ben Keating, Jeroen Bleekemolen and Luca Stolz overcame a couple in-race obstacles to finish third in their No. 85 Ferrari 488 GTE.

Both Bleekemolen and Keating made it out of quick off-course excursions into the gravel to keep the car running. Typically solid pit work from the Risi crew kept the car in contention all race. Bleekemolen completed more laps than any other driver in the field.

With 156 laps I did most laps of the race of any driver. No trophy for that tough, just more sore the next day! ? Great effort from the whole team to get onto the podium. Thanks all who made it possible, hope two steps higher next year! pic.twitter.com/nxNTJgTuC3

This is Keating’s first Le Mans podium finish in four attempts, and Stolz’s first on his debut. For Bleekemolen, Sunday’s result marked a return to the Le Mans podium for the first time since his LMP2 class win in 2008.

“All-in-all the car ran flawlessly, the crew made no errors in the pits and had excellent prep and that’s what it takes to do well at Le Mans,” said Risi/Keating race engineer Rick Mayer. “We spent no time in the garage. I think you have to be happy with the podium, even though we’d like to win it, but I think it was a good result.” 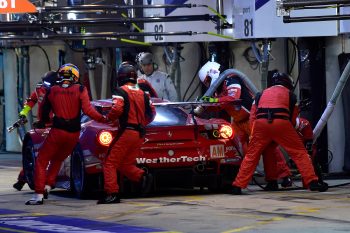 Keating added, “I am excited to have a podium here, excited to be in position to have the podium here. I still have a hard time getting over the mistake that cost us second, and I know Jeroen has been giving himself a hard time for 22 hours for the mistake for a chance to win it, but a podium at Le Mans is special. I’m grateful for that and I’m grateful to be here and have a really incredible run with the team, with the car.

This is the Risi team’s first podium finish this year in three overall race starts. They were fifth at the first two IMSA races of the year in GT Le Mans in Daytona and Sebring. Risi hopes to return to action at a later IMSA race this season. 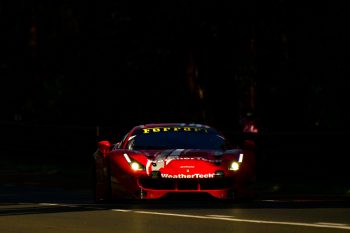 “Today the race preparation of the car was exceptional. It didn’t miss a beat. The pit stops couldn’t be faulted. When you do that and give the drivers a car like that it makes everything work – pit stops, driving, the car has hardly a scratch on it after 24 hours, which is very unusual.

“The Risi quality of preparation, the strategy and pit stops were all perfect and it showed. We were really pleased with it and so were the drivers.”

Bleekemolen, Keating and Stolz are back in action in Riley Motorsports’ No. 33 Mercedes-AMG GT3 at Watkins Glen International in two weeks, in the IMSA GT Daytona class.