On a hot afternoon, Dirk Mueller maintained his hot streak in qualifying at Road America. 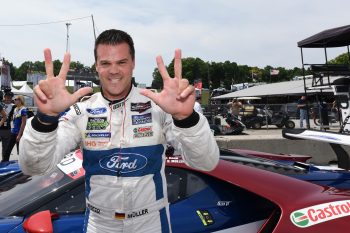 The German driver captured his third straight pole position at the track. Today’s pole time was set under sunny skies and ambient temperatures over 90 degrees with the humidity, and track temperatures over 100, in his No. 66 Ford GT.

Mueller’s best time in qualifying was a 2:02.479. He shares the Ford Chip Ganassi Racing entry with Joey Hand.

That pair leads the GT Le Mans class by one point over the No. 3 Corvette C7.R, with the No. 67 Ford GT pair two points back. 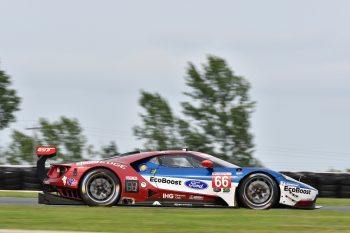 Mueller extends the streak of different polesitting drivers this year to eight in eight GTLM races.

Ryan Briscoe in the No. 67 Ford qualified second, and will co-drive with Richard Westbrook.

The No. 3 Corvette slots in third, with Jan Magnussen and Antonio Garcia sharing that car. While Magnussen is a past winner at Road America, this track stands as a rare one where this pair has not won together in their illustrious career as co-drivers.

The best Porsche was Laurens Vanthoor in fourth in the No. 912 car, with he and Earl Bamber having focused on long runs in Friday’s practice.

In Prototype and overall, Robert Alon scored a surprise pole position for JDC-Miller Motorsports, in the No. 85 Oreca 07. He shares that car with Simon Trummer.