Ford fights for Le Mans podium with its U.S. crew

Ford fights for Le Mans podium with its U.S. crew

Ford Chip Ganassi Racing scored its fourth podium finish in three years at the 24 Hours of Le Mans. The U.S. crew of Joey Hand, Dirk Mueller and Sebastien Bourdais, in the team’s No. 68 Ford GT, finished third in GTE-Pro behind the two Porsche 911 RSRs. 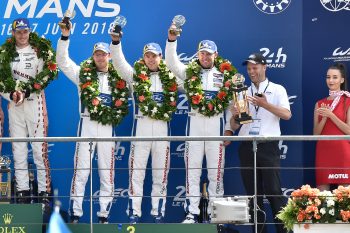 Bourdais, in particular, stood out on home soil. The Le Mans native’s battle with Frederic Makowiecki with three and a half hours to go stood as a race highlight. While Bourdais was less than thrilled with Makowiecki’s driving conduct, he knew the efforts of the Ford Chip Ganassi Racing team couldn’t go to waste.

Hand described how hard the Ford team pressed on, as one of several cars dealt a bad hand on timing of a fourth hour Safety Car period. The Safety Car trapped several cars in the pits that had just stopped, and the No. 68 Ford was one of them.

Well this pretty much tells the story! Finished P3 here at the 24 Hours of Le Mans! So thankful for all the hard work from our Ford Chip Ganassi team and everyone else that works to make these GT’s go around for 24 hours. Until next year! #giddyup #lemans24 pic.twitter.com/IltDWnjoNO 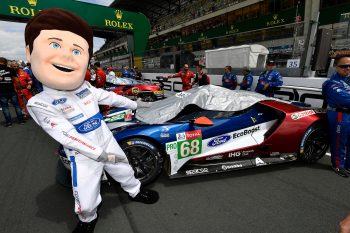 “We just got caught out a couple times there with safety cars and that hurt us and we couldn’t make it up.  I have been here four times and been on the podium three of them, so that’s pretty cool.”

Gearbox issues sidelined the other U.S. Ford, the No. 69 car shared by Ryan Briscoe, Richard Westbrook and Scott Dixon. That trio was looking for its second 24-hour race win of the year, having won the Rolex 24 at Daytona in January. 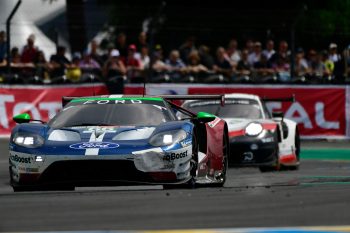 The two U.K. Fords were classified sixth and 12th in class. Olivier Pla, Stefan Muecke and Billy Johnson shared the No. 66 Ford. They pressed on despite Johnson sustaining suspension damage.

Meanwhile the trio of Harry Tincknell, Andy Priaulx and Tony Kanaan lost a fourth place finish on the road with a drive-time violation found post-race. This dropped the No. 67 Ford GT down the order for a second straight FIA World Endurance Championship race.

Ford’s next U.S. race is at Watkins Glen on July 1. The FIA WEC contingent races again in Silverstone in August.